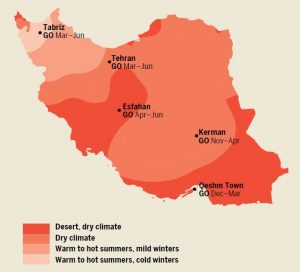 January
You’ll see few travelers in mid-winter. Much of western Iran will be under snow and mountain roads can be cut off. Desert nights are very cold, but the days are pleasant and sunny.

February
February is often the coldest month, which is good for skiing but otherwise not the most pleasant time to travel the country. The month also has a couple of stand-out events.

March
The whole country hits the road for No Ruz, the Iranian New Year, which is also the start of spring. For two weeks Iran virtually shuts down. Hotels are packed and traveling is tricky.

April
It’s spring, the temperatures rise, flowers bloom, Iranians return to work and weather-wise it’s the best time to visit. April and May is peak season for foreign travelers; book ahead for rooms and flights.

May
With mild temperatures, May is a good month to travel in Iran but it’s still high season. Wildflowers bloom from the west to the northeast, while anywhere close to the Persian Gulf coast temperatures are really starting to heat up.

June
It’s late spring and getting warmer and more humid, but as it’s not crazy hot (except along the Persian Gulf littoral or the lowlands around Shush) and few are traveling, this is still a good time to visit.

July
High summer is here and aside from the mountains, it’s very hot everywhere. In Tehran pollution is severe and at the worst times, a holiday is announced at short notice.

August
A good time to visit the mountains of western Iran, if not the desert, where temperatures can hit 50ºC. On the coast and in the desert shops close for five-hour siestas and evening is the most pleasant time.

September
As summer segues into fall/autumn, the sun loses the worst of its sting (only the worst – much of Iran still bakes) and it’s a good month to go hiking in the mountains.

October
With moderate temperatures and no snow to block roads, October is a pleasant time to travel, and many Iranians take a break. Fierce summer temperatures are a thing of the past.

November
Winter is coming and with it the cold and snow. Travel in the mountains of western Iran can be tough, but the desert, coast, and cities of central Iran can be quite pleasant.

December
A cold time to visit as the winter chill really kicks in (except on the Persian Gulf). Expect cold, clear skies, low golden light and snow-dusted hills – Western Iran, in particular, is at its most photogenic