The beliefs and attitudes of peoples in the world constitute a major part of the arts and culture of each nation. Since the originality of a nation and its culture are shown in art, so artworks have been a reflection of the culture and beliefs of every nation over the centuries, and they have an unbreakable link with the history of the art of the tribes. Most of the ancient beliefs of every civilization are formed by the gods, myths, and legends of that civilization. The influential figures of these myths are legendary-imaginary creatures which made up of two or more other creatures. One of these important creatures in the ancient myths of Iran and other ancient civilizations, is Griffin or Shirdal, the half-eagle, and half-lion creature.

Different opinions about the origin of Griffin have come to the light; some believe that it belongs to the Scythians (North Asian people), and some call it the roots of the stories of India and Iran. In spite of significant examples of this creature in ancient Greek art, there can not be found a prominent place for Griffin among the myths of Greek civilization. But if we would find the exact origin of Griffin, we must say that as the various names for this combinational creature are mentioned, with the various forms appearing in the art of different nations and Iran, it is likely that Asia can be the origin of this creature. 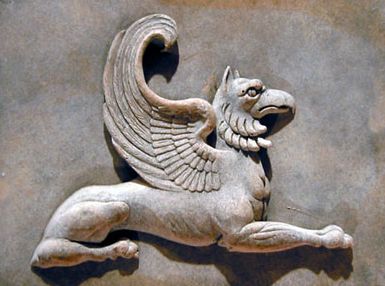 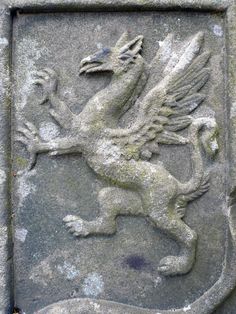 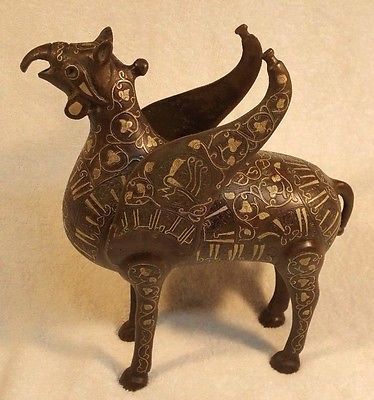 Griffin has been introduced in some historical periods of Iran as a bird of Homa, which had a sublime place in Iranian literature and beliefs, and considered it a symbol of happiness and prosperity, and it seemed that its shadow fell on anyone, making him happy; In the Sassanid era, its role in textiles and containers has been the concept of the goodness of life for its holder. In some of the early designs, Griffin is depicted alongside the tree of life, which can be taught as a guard to protect against the devilish forces, and during the Achaemenid period, this creature symbolizes Iranian wisdom.

Griffin in Iranian Artworks and its form features:

The patterns acquired from this period are related to Marlik hills, Lorestan, and Ziwiyeh area. There are also artworks with the figure of combination creature including the bird’s head and the body of a four-footed animal from Amlash Hasanlu area. The figure of the Eagle has also been observed on the pottery and cylinder seal of ancient Persia. Among the Ilam cylindrical seals and jellies of silk hills in Kashan, eagles with widespread wings are painted. In the Shusha tiles (related to the third millennium), the golden medallion is represented by the figure of an eagle with open wings, as well as Lorestan’s bronze works, artifacts near Amlash and Marlik, and Hasanlu’s golden bowl (early 2nd millennium BC) are also decorated with the figure of Eagle. But the oldest Griffin sample in Persian art has been observed on the metal container from the Marlik hill. The history metal cup of Marlik is taken back to three thousand years ago, the end of the second millennium and the early millennium BC. There are Four griffins on the four sides of the upper edges embossed on the Golden Cup. Another example of Griffin is a small golden jewelry set of eight centimeters in height, derived from the Ziwiyeh of Kurdistan, dating back to the fifth century BC.

Griffin in the Achaemenid period:

Griffin samples date back to the Achaemenid period of 500 BC. The artistic form of these particular creatures dates back to the Achaemenid Period and represents the most memorable Griffins from all ages. Achaemenid Griffins are made up of large sizes in capitals to small ones in jewelry. One of the patterns found on the margin of the Pazyryk carpet of the Achaemenid period is a Griffin, which is repeated in the form winged lion alternatively. The other type of Griffin, which is specific to the Achaemenid era and the inventions of the time, is the horned Griffin that is observed in Achaemenid jewelry samples. On these jewels, the combination of the eagle’s head and the hands of the lion with the bird’s paw has also been added. Adding the horn doubles the sanctity and respect attribute of this creature.

Griffin in the Sassanid period:

The figure of the Eagle in Sassanid periods has great importance. In many Sassanian artworks, the figure of the eagle or only the eagle’s wings is portrayed, but the figure of the griffin in a way that was previously common was changed into a bird called the Sassanid Simorgh. This bird is a combination of a lion’s body, a head belongs to a dog or lion with wings and an eagle’s claw, and sometimes a tail of peacock’s feathers. This mythological and giant bird, which is generally seen in all Sassanid works made up of metal, stone and textiles have meant the concept of bringing happiness and goodness of life to its owner. It seems that the Sassanid Simorgh is the same as the Achaemenid Griffin, which has both roots in literature and mythical stories and Pahlavi texts and religious songs of India and Iran.